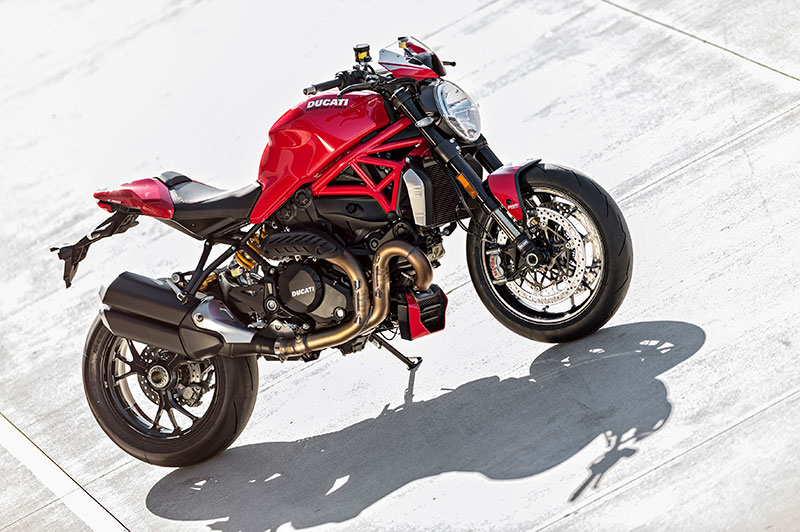 The most powerful Ducati naked ever is almost here: a more powerful engine, a sportier chassis and an advanced design.

The new Monster 1200 R, a first taste of the 2016 Ducati range, has been unveiled during the Volkswagen Group Night in Frankfurt. With its 160 hp, the Monster 1200 R is the most powerful Ducati naked of all time.

Its key features include the Testastretta 11° DS twin-cylinder engine in its “R” version (EURO 4 homologated) and a revised chassis to ensure maximum effect and enjoyment on track. In addition, the brand new design of the tail and front section confirm the sporting credentials of this new version of the Monster.

Available in Ducati Red and Thrilling Black, the new Monster 1200 R will be on the market from early 2016. Call Ducati Manchester to learn more.

Design
Unmistakably Monster, aggressively racing. The Monster 1200 R makes an immediate impact with its sporty, compact and lightweight lines. The typical Monster design of the tank blends with the sporty lines of the rear section that, thanks also to the new compact, lightweight frame, immediately conveys an idea of power and dynamism.

Racing aesthetic
The tailpiece is aerodynamic, pointing upwards, while the seat - one single piece for rider and passenger - is shorter and slimmer. The licence plate holder, fixed in a high position, means the 200/55 tyre is clearly visible, mounted on a three-spoke forged wheel, inspired by that of the Panigale R.

Attention to detail
The new aesthetics of the Monster 1200 R are completed by the screen and longitudinal graphics inspired by the classic Ducati Corse band. The exclusiveness of this model is also reflected in the attention to detail, for example the metallic radiator covers with R graphic obtained through sanding.

Refined materials
The Monster 1200 R is available in Ducati red and new Thrilling black; both versions are enriched by a longitudinal sporty motif, representing the "R", which appears on the front mudguard, the mini-frame, tank and passenger seat upholstery.

Colour range
The Monster 1200 R is available in Ducati red and new Thrilling black: both versions are enriched by a longitudinal sporty motif representing the "R", which appears on the front mudguard, the mini-frame, tank ad passenger seat upholstery.

With its 1200 cm3 Testastretta 11° DS twin-cylinder engine in the "R" version, the new Monster 1200 R takes the naked concept to the extreme. The new engine is in fact able to express its full potential with a full, fluid supply even at low speeds, perfect for riding on the road but also between the kerbs of the track.

The Monster 1200 family is powered by the second generation of Testastretta 11° DS engine, smoother and with dual spark plugs and a secondary air system. Dual Spark (DS) ignition uses two plugs per cylinder to ensure complete combustion in a very short time. A secondary air system similar to that of the 1299 Panigale has been introduced to optimise operation and reduce cyclic combustion variability without affecting emissions. A controlled flow of fresh air is supplied to the exhaust duct to enable complete oxidisation of hot unburnt gases, to effectively reduce hydrocarbon and carbon monoxide levels. The Testastretta 11° DS engine that equips the Monster 1200 family is unique to those bikes, as its structure is engineered to be a structural element of the frame. The "R" engine version is tuned for power and torque and to be Euro 4 complaint. Engineers increase air-intake, burn and exhaust efficiences. The engine breathes further better thanks to new elliptical throttle bodies and air ducts Ø 56 mm equivalent, larger than the Ø 53 mm standard circular system. The cylinder heads are new too with increased air inlet ducts to perfectly match the different in shape and dimension air ducts. A lower cylinder-crankcase gasket rises the compression ratio to 13,0:1 respect the 12,5:1 of the standard 1200 cc engine. The exhaust system is completely new with larger Ø 58 mm exhaust pipes and a new Euro 4 complaint silencer. The Euro 4 preparation is completed with engine noise reductions as a dedicated clutch cover and new pistons with graphite surfacing.

The "R" engine version is coupled via Æ 58 mm pipes to an impressive side-mounted 2-1-2 staggered shotgun exhaust that makes no secret of the performance of which the new Monster 1200 R is capable. The bigger in dimension silencer to be Euro 4 compliant has a sport and “mechanical” design, consistent with the "nerve" forms of the tail. The engine management system dedicates a lambda probe to each header, providing precise fuelingwhile an electronically controlled mid-section valve optimises exhaust pressure throughout the rev-range.

Suspension set-up
The Monster 1200 R is equipped with fully adjustable suspension and shock, both by Öhlins. The braking system, produced by Brembo, sees two radially mounted Monobloc M50 callipers acting on two 330mm discs at the front; the same components as those on the 1299 Panigale sports bike.

Technology
All of Ducati's cutting-edge technology plays a part on the most exclusive model in the Monster family: Riding Modes, Ride by Wire system, TFT dashboard and much more.

Safety
High performance in maximum safety: the Monster 1200 R is also equipped with the Ducati Safety Pack as standard that, along with the ABS system and DTC (Ducati Traction Control), offer control in every riding situation.

Maintenance
The meticulous design and top-quality materials used for the Monster 1200 R have allowed amazing results to be achieved. Adjusting the valve clearance is scheduled for every 30,000 km and changing the oil every 15,000 km or every 12 months, increasing service intervals and cutting running costs.

Ducati guarantees all its bikes for a period of 24 months from registration, with unlimited mileage.

We offer a range of affordable finance options on new & used Monster motorcycles. 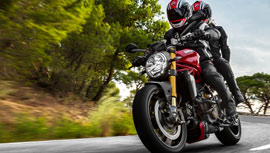 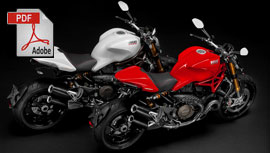 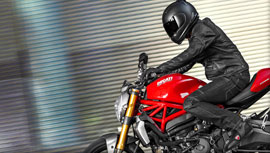 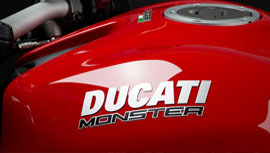