Transforms every road into a thrill-fest

Alternatively, click here to view the all new 2015 MTS Multistrada 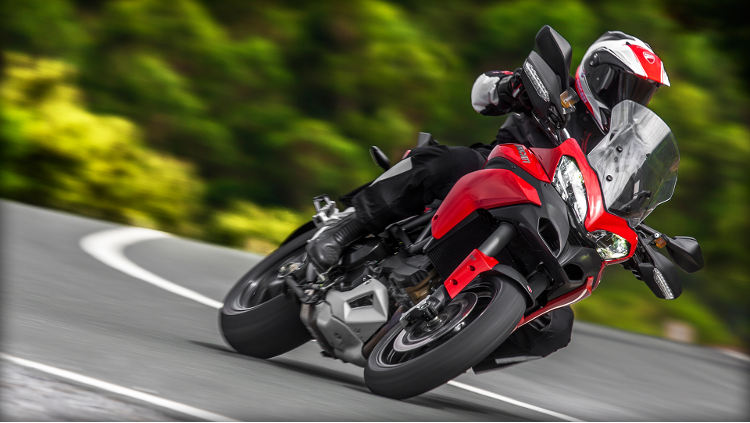 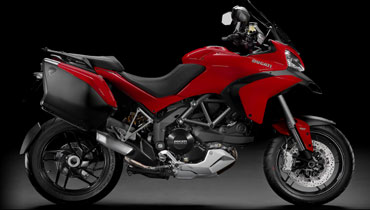 Learn more about the 2014 Multistrada Touring 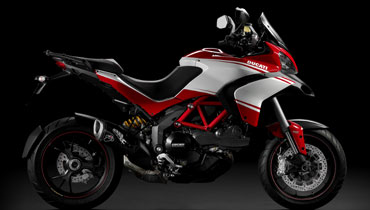 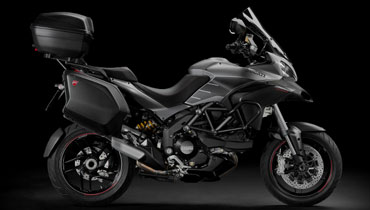 Learn more about the 2014 Granturismo

The new Multistrada 1200 transforms every road into an unending thrill-fest. Skyhook suspension, which ensures the best set-up every inch of the way, and the stunningly smooth Testastretta 11° DS engine merge with unmistakeable Ducati appeal to provide the ride of your life.

2014 sees the latest incarnation of the Multistrada. All models include the following features:

For 2014, features include the Multistrada 1200 with the associated Riding Mode technologies of Ride-by-Wire (R-b-W) and Ducati Traction Control (DTC) in addition to the very latest in ABS.

The new tourer flagship of the range for 2014 is the Multistrada 1200 S Granturismo featuring increased side luggage capacity, a top case, additional LED illumination, enhanced wind protection and long-distance tyres.

The latest Multistrada 1200 S Pikes Peak celebrates the sportier side of the Multistrada range. Featuring a replica of the famous 2012 mountain race bike in its stunning new race-winning colours and livery.

Ducati's four-bikes-in-one concept is achieved by selecting from a choice of four pre-set Riding Modes programmed to instantly change the engine character and the riding parameters of the Multistrada 1200 - even while riding. The four modes are made possible by combining a number of class-leading technologies. An electronic Ride-by-Wire (RbW) system administers different mappings to regulate power delivery by interpreting the rider's throttle input, while the world-beating Ducati Traction Control system (DTC) uses eight levels of system interaction to enhance control by reducing wheel-spin. For 2013, ABS is also programmed to offer the optimum setting appropriate to the Riding Mode selected and, for the ‘S' versions, Sachs electronic suspension front and rear not only configures the suspension set-up with Riding Mode appropriate electronic adjustment, but Ducati Skyhook Suspension (DSS) now also instantly reacts to additional inputs to maintain overall vehicle composure for a smoother ride.

The Testastretta 11° engine was introduced on the Multistrada 1200 in 2010. Derived from the Superbike 1198 engine, it achieved brilliant results when valve overlap was reduced from 41° (typical of sport engines) to 11°, losing some peak power in favour of improved overall smoothness, especially in the mid-range.
The new Multistrada family introduces the second generation of Testastretta 11° DS engines with several new features that make it even smoother and more tractable. Dual Spark ignition (DS) uses two plugs per cylinder to ensure complete combustion in very short time. The fuel injectors have been relocated to aim the jet of fuel directly at the hotter rear end of the suction valve, so that all fuel is atomised. A secondary air system similar to that of the 1199 Panigale has been introduced to optimise operation and reduce cyclic combustion variability without affecting emissions. A controlled flow of fresh air is supplied to the exhaust duct to enable complete oxidisation of hot unburnt gases, to effectively reduce hydrocarbon and carbon monoxide levels.
With 150 hp power, 12.7 Kgm (124.5 Nm) torque and 10% less consumption (at 90 kph), the Testastretta 11° DS engine sets a new benchmark for Ducati twin-cylinder engines.

Ensure superior comfort for rider and passenger, even when carrying a full load..

With long distance touring ability ranking among its distinctive features, the Multistrada 1200 underwent an extensive ergonomic study using CAD and prototype testing to ensure superior comfort for rider and passenger, also when carrying a full load.

Rider and passenger triangles have been designed to offer the utmost comfort and fit. There is ample space for riding two up with top case and side panniers installed.

To further enhance its "multi-purpose" vocation, the Multistrada 1200's ergonomics were designed and tested to make it easy to ride standing up, a significant benefit when riding on bumpy terrain.

Book your Multistrada Test Ride today - We always have a selection of Demo bikes available.

2011 Ducati Multistrada
For 2011 we saw the addition of the 1200 S Pikes Peaks Special Edition to the Multistrada range.

The Ducati Multistrada introduces a new generation of sport bikes, capable of excelling on every road with amazing sports performance, outstanding comfort and everyday-use versatility. Ideal for a day in the mountains, the daily commute or a weekend tour, the Multistrada offers sport bike aggression on twisty roads, yet is smooth and relaxed when scenery beckons.

The Multistrada’s all-around performance is better than ever. The 2009 Multistrada features the potent 1100 Desmo engine with a quiet and robust wet clutch, comfort enhancing vibration-isolated handlebars, and a maintenance program that reduces costs by as much as 50%*.

Developed on the winding mountain roads and city streets of Northern Italy, the Multistrada is a real-world motorcycle for real-world riders. It is a dream come true: a high performance sport bike that doesn’t compromise comfort, versatility or practicality.

The Multistrada breaks down all barriers. Its unique versatility is a matter of design. On mountain roads its impressive cornering performance comes by way of Superbike-grade suspension, world-class brakes and the renowned Ducati Trellis frame. For long journeys, the longer-travel suspension smoothes the way, vibration-isolated handlebars reduce fatigue and the relaxed riding position optimises comfort for both rider and passenger. In town the agile chassis, wide bars and broad power of the 1100 engine make crossing city traffic an adventure to look forward to.

Call Ducati Manchester today and book your test ride on the all new 2014 Multistrada.