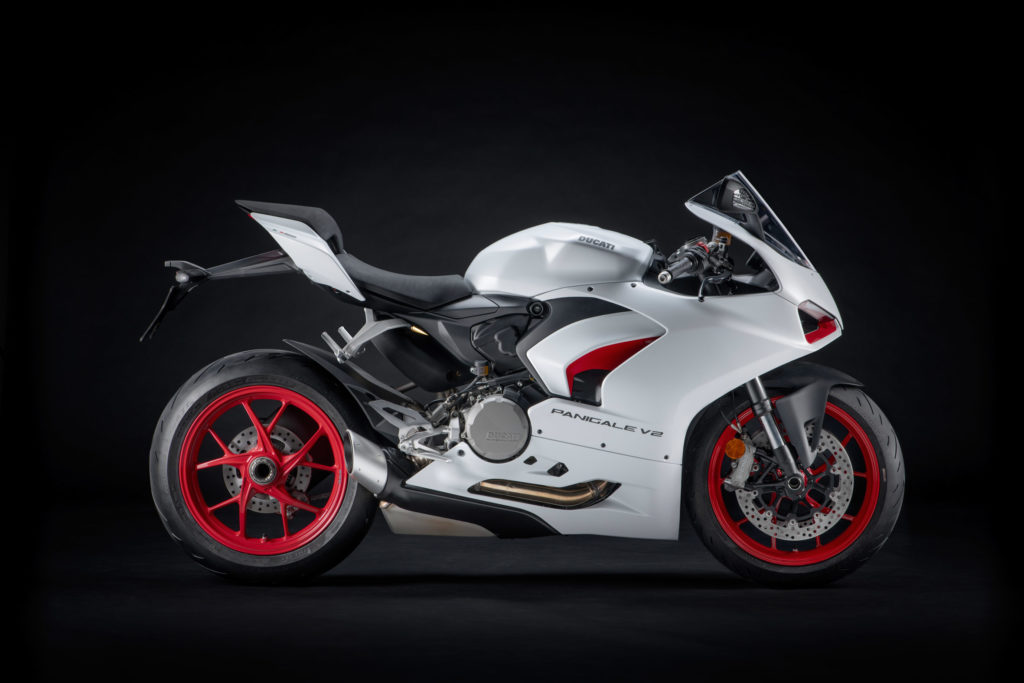 The new White Rosso livery of the Panigale V2 has Star White Silk as its main colour.

The predominance of the white colour scheme enhances the design of the Panigale V2, by highlighting the lines and the purity of the geometrical shapes.

The star white body work is complimented with Ducati Red on the rims, front air intakes, and the deflector of the upper half-fairing. Emphasizing the sport and power of the V2. 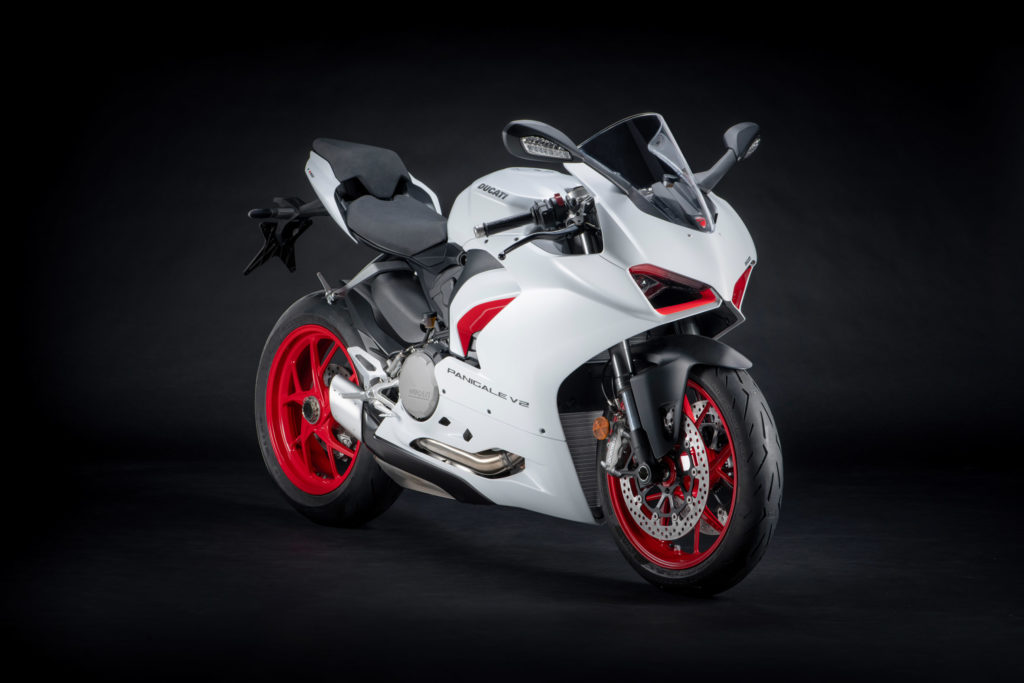 This new livery is completed with an additional touch of sportiness thanks to the positioning on the lower half-fairings of the large Panigale V2 logo, inspired by the graphics of Ducati Corse motorcycles.

Production of the White Rosso Panigale V2 is due to commence in July 2020.

The Red Essence. In white: new livery for the Ducati Panigale V2 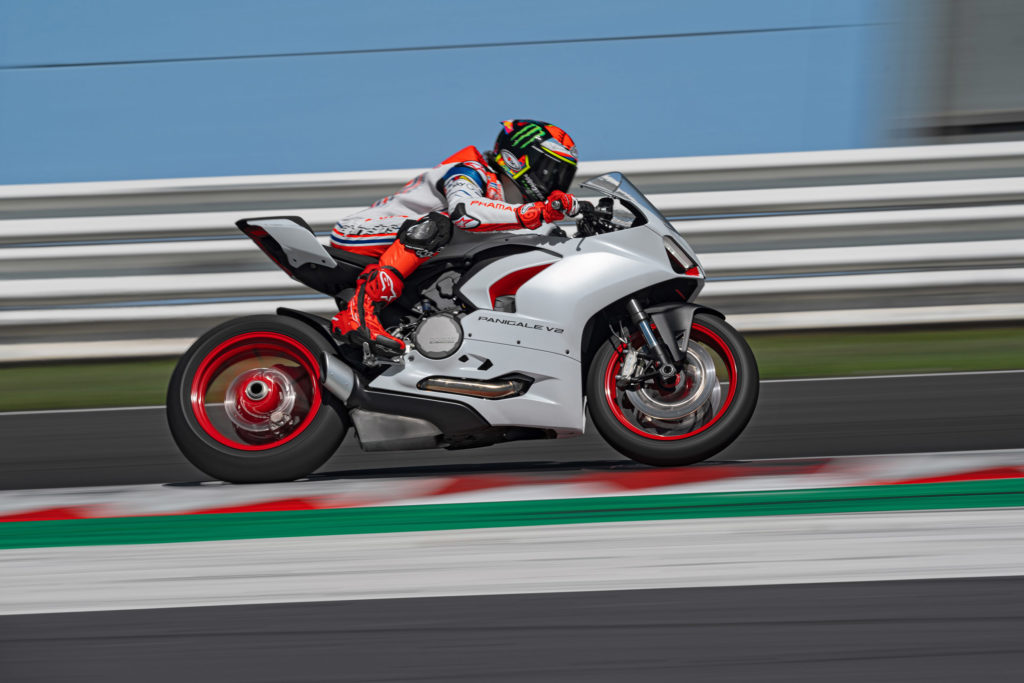 The new White Rosso livery has Star White Silk as its main colour. The predominance of white enhances the design of the Panigale V2, highlighting the lines and the purity of the geometrical shapes. At the same time the details in Ducati Red emphasize its sporty and powerful character. The Ducati Red colours the rims, the front air intakes and the deflectors of the upper half-fairings. These last two red touches ideally accompany the path of the airflows inside the motorcycle, i.e. those that feed the engine and those that pass through the radiator.

This new livery is completed with an additional touch of sportiness thanks to the positioning on the lower half-fairings of the large Panigale V2 logo, inspired by the graphics of Ducati Corse motorcycles.

Testimonial of the Panigale V2 and protagonist of the photo and video shooting of the new livery is the rider of the Pramac Racing Team Francesco “Pecco” Bagnaia. In fact, Pecco was able to enjoy a preview of the bike by testing it at the Misano World Circuit “Marco Simoncelli”.

“Since 2016, my personal motto has been #GoFree. For me it means living in a light-hearted and carefree way, having fun and giving priority to the things you love to do. I think the Panigale V2 fits well with this definition and reflects my way of being “, said Pecco Bagnaia after trying the Panigale V2. “The new livery, so white, is very beautiful and different from the usual. Despite being a street bike, it surprised me how much speed it can have when cornering. It is a fun, very stable and very sincere bike that allows you to go fast, safely, without becoming tired, while having a very strong and decisive character and personality.”

The Panigale V2, presented less than a year ago and capable of immediately conquering an enthusiastic public, is the super-mid of the Ducati sports bikes and represents the entry model to the Panigale family. It is powered by the 955 cc Superquadro twin-cylinder engine (compliant with Euro 5 standard) and has a maximum power of 155 hp at 10,750 rpm and a maximum torque of 104 Nm at 9,000 rpm. The power of the Panigale V2 allows to have fun on the track, delivering a motorcycle in the hands of the rider that never puts you in difficulty and can always be fully exploited. The delivery of the twin-cylinder is such that more than 70% of the maximum torque is constantly available beyond 5,500 rpm, allowing to get out of the corners quickly, even the slowest ones.

The chassis of the Panigale V2 is based on the monocoque frame and is dressed in an elegant and sporty design inspired by that of the Panigale V4. The fairing has extensive and clean surfaces that surround the mechanical components, enhancing the small size of the Superquadro twin-cylinder and creating a visually compact motorcycle.

The “family feeling” with the other Panigale models is also underlined by the single-sided swingarm, while the compact-sized single lateral exit exhaust, with under-engine silencer, emphasizes the clean lines of the Panigale V2.

The complete and modern electronic equipment, based on the 6-axis inertial platform, leaves no doubt about the sporting DNA of the bike. The electronic package, dedicated to active safety and vehicle dynamics control, includes the “cornering” functionality applied to the Bosch ABS, an electronic gearbox, with operation also in downshift and traction, engine braking and wheelie controls. All the controls are integrated into the three Riding Modes (Race, Sport and Street) that can be modified via the 4.3” TFT colour dashboard with graphics and interface designed to make menu navigation and setting adjustments intuitive, as well as the immediate identification of the selected Riding Mode. 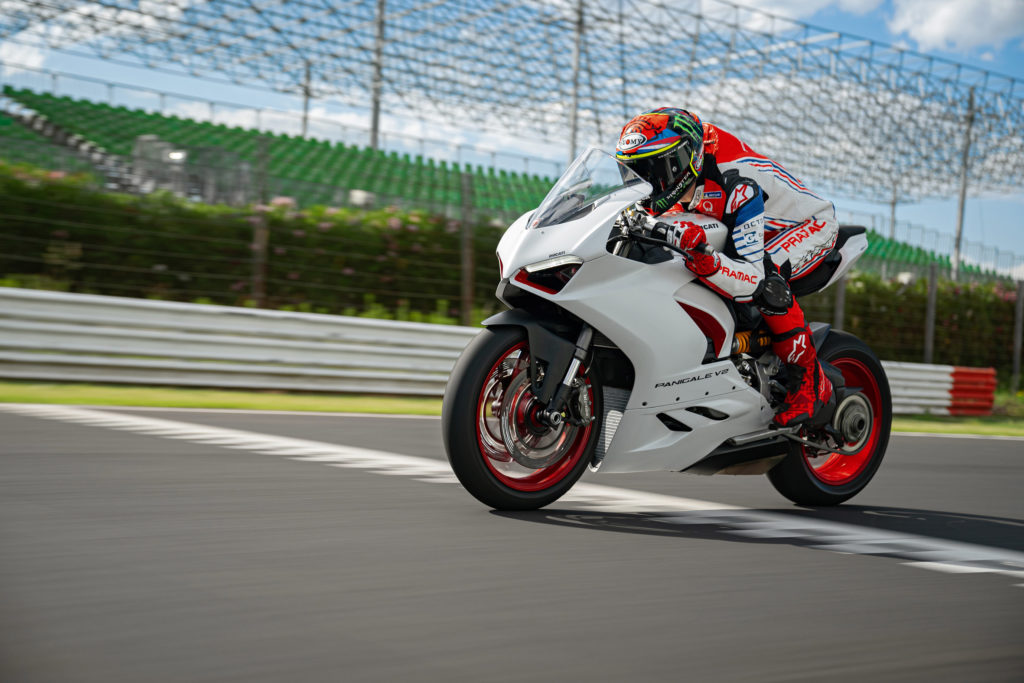 The chassis has fully-adjustable suspension with a Showa Big Piston Fork (BPF) 43 mm in diameter and a Sachs shock absorber set up to make the bike intuitive, agile and fun; in addition, the specific calibration of the hydraulic brakes makes it comfortable for road use. Pirelli Diablo Rosso Corsa II multi-compound tyres, which combine track performance with versatility on the road, also contribute to the dynamic qualities of the Panigale V2.

The ergonomics of the semi-handlebars and the rider seat offer a non-fatiguing position on the road and an efficient one on the track, thus allowing the rider to move freely.

The technical equipment is completed by a Sachs steering damper and by a Brembo braking system with M4.32 monobloc callipers activated by a radial brake master cylinder. The discs are 320 mm in diameter at the front with a single 245 mm disc at the rear. Braking is powerful, never excessively aggressive and always adjustable.

Production of the Panigale V2 in White Rosso livery from July 2020.